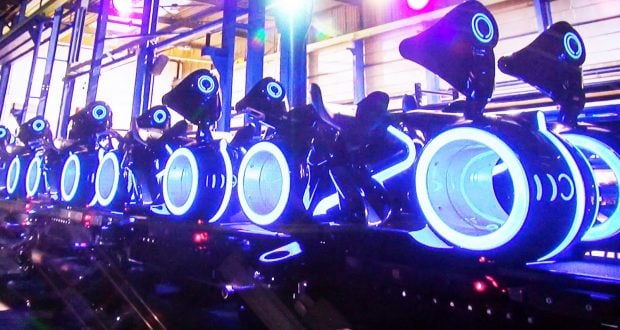 While several sites are calling this rumor confirmed, Disney has not made a formal announcement.  But yeah, all signs point to this happening.

There has been a lot of speculation and rumors about changes coming to the Tomorrowland area at Magic Kingdom in Walt Disney World.  One extremely exciting rumor that is looking even more likely is that a TRON Lightcycle Power Run Rollercoaster may be in the works for Tomorrowland.  The site for the new attraction is expected to be where Tomorrowland Speedway currently resides, thus resulting in a permanent closure for the attraction.   Currently the attraction is rumored to be ready to open around 2021, which would be just in time for Magic Kingdom’s 50th Anniversary celebration at the park.  Tomorrowland Speedway was an original attraction that opened with the grand opening in 1971, so this would mean one of the original attractions would no longer be in place to pave the way for the next exciting coaster.

TRON Lightcycle Power Run debuted with the opening of Shanghai Disneyland on June 16th, 2016. It is the fastest of any Disney coaster around the globe, reaching over 60 miles per hour.  It is a semi-enclosed steel coaster that has you feeling like you are sitting on a cycle while you ride.  The attraction has been extremely popular and has received a lot of attention and envy from guests around the world.  The addition of this attraction at Walt Disney World would be a huge draw.

Currently there have been no formal announcements from Disney on this possible development or any known permits filed to start development.  If this is truly a valid rumor, we are expecting that the development would be announced at the upcoming D23 expo later this month!

What would you all think of this possible development in Tomorrowland?  My family is on pins and needles hoping that this one is true!

Disney’s Animal Kingdom From A to Z